A Journey to Brittany 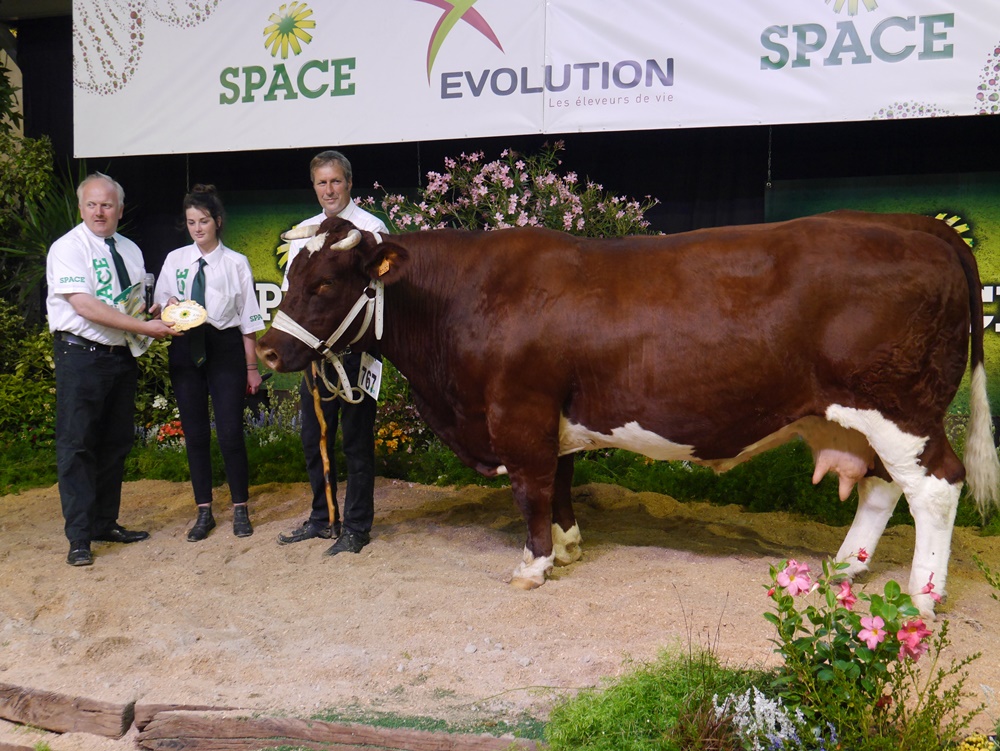 I was very surprised when, in late summer of last year, I was invited to the national exhibition in Rennes by the UPRA Maine-Anjou. I was also asked to act as a judge for the first valuation class.

And so, at the beginning of September, I set off for Brittany. The first leg of my journey led me to Lorraine because Antoine Hild, a German-speaking breeder near Metz, wanted to accompany me. The following day, we made our way to Rennes. With a 7.5 ton truck loaded with a 1,300 kilo bull belonging to Christian Perrin, we made our way to the show. Our road led us south of Paris past Anger and Orleans towards Rennes. We passed expansive farmlands cultivated with grains and alfalfa, which are dried to pellets in large drying plants. Many fields were irrigated. In all of Central France we did not see a single cow. Only when we arrived in Mayenne, in the far West of France, did we finally see cattle of many different breeds, among them large herds of Maine-Anjou. Although they were left on rather withered pastures, they seemed to be in surprisingly good condition.

On our way we saw what would happen if Germany introduced toll charges for all vehicles – empty motorways in excellent condition and congested federal and country roads. On our route, we had to pay more than 100.00 Euro in toll charges.

We arrived on the exhibition grounds in Rennes late in the evening. We were surprised at the relaxed and friendly manner in which the vets processed us at this late hour. Apart from Maine-Anjou, the halls also held other breeds, such as Montebillard, Normande, Fleckvieh, Jersey and Blue-Whites, as well as a few others. The Space Rennes, as the exhibition is called, is one of the bigger agricultural exhibitions in France. Besides cattle, there was a lot more to see and from rabbits to horses the exhibition had quite a lot to offer. Additionally, many agricultural engineering companies were represented. The day ended late and full of impressions.

The following day was the day of the Maine-Anjou breeding competitions. Overall, 12 valuation classes were judged and some impressive cows and bulls were presented. I was tasked with judging valuation class 9, which selected a champion from cows that were conceived through insemination. In my opinion, it was a strong group with very even-tempered animals sired by Ijou, Belfort, Uno, Dacodac, and Utile. My favourites were two daughters of the sire Ijou and one excellent young daughter of Belfort. I decided for a 9 year old lively, dark red Ijou daughter, a cow every breeder would be proud to own.

After the breeding competitions, I still had enough time to deepen and advance the French-German contacts. Finally, I would like to thank our hosts for the friendly reception and my friend Antoine Hild for acting as my interpreter.

No Events were found.
Animal show 2016 at the Düsser farmers market

Invitation to a Maine-Anjou herd inspection
Scroll to top

This site uses third-party website tracking technologies to provide and continually improve. I agree and may revoke or change my consent at any time with effect for the future.

We may request cookies to be set on your device. We use cookies to let us know when you visit our websites, how you interact with us, to enrich your user experience, and to customize your relationship with our website.

Click on the different category headings to find out more. You can also change some of your preferences. Note that blocking some types of cookies may impact your experience on our websites and the services we are able to offer.

These cookies are strictly necessary to provide you with services available through our website and to use some of its features.

Because these cookies are strictly necessary to deliver the website, refuseing them will have impact how our site functions. You always can block or delete cookies by changing your browser settings and force blocking all cookies on this website. But this will always prompt you to accept/refuse cookies when revisiting our site.

We fully respect if you want to refuse cookies but to avoid asking you again and again kindly allow us to store a cookie for that. You are free to opt out any time or opt in for other cookies to get a better experience. If you refuse cookies we will remove all set cookies in our domain.

We provide you with a list of stored cookies on your computer in our domain so you can check what we stored. Due to security reasons we are not able to show or modify cookies from other domains. You can check these in your browser security settings.

These cookies collect information that is used either in aggregate form to help us understand how our website is being used or how effective our marketing campaigns are, or to help us customize our website and application for you in order to enhance your experience.

If you do not want that we track your visit to our site you can disable tracking in your browser here:

We also use different external services like Google Webfonts, Google Maps, and external Video providers. Since these providers may collect personal data like your IP address we allow you to block them here. Please be aware that this might heavily reduce the functionality and appearance of our site. Changes will take effect once you reload the page.

The following cookies are also needed - You can choose if you want to allow them: